The approach takes advantage of the fact that when an orbital electron is displaced by an electron from the microscope beam, an X-ray is produced. The identification of an element is then based on the analysis of its X-ray energy, which is a fundamental property of that element.

Material can be described at a single location by a value that indicates the ratios of elements (so-called quant’) or by an elemental map that depicts the individual constituent concentrations as a sequence of color-coded pictures at an array of points across the sample.

What are Silicon Drift Detectors, and how do they work?

EDS requires a microscope equipped with an X-ray detector, as well as necessary hardware and software outside the microscope.

Silicon drift energy-dispersive X-ray detectors (SDD) have become increasingly popular in recent years. There has been a significant decline in the usage of more classic Si(Li) type detectors, which has made SDD the sensor of choice for the majority.

SDDs with large active areas, such as the X-Max, now allow users to gather vast quantities of data in shorter periods, at lower excitation voltages, and under standard SEM imaging circumstances, in addition to being liquid nitrogen-free having good energy resolution at high count rates.

What Is a Silicon Drift Detector and How Does It Work?

The EDS detector converts the energy of each individual X-ray into a proportional voltage signal. Towards this end, a three-stage process is: As soon as atoms in the semiconductor crystal are ionized, they become charged, which is then later converted into a voltage signal by the FET preamplifier. Finally, the voltage signal is sent into the pulse processor, where it is measured. The preamplifier’s output is a voltage ‘ramp,’ with each X-ray appearing as a voltage step on the ramp.

EDS detectors are built to convert X-ray radiation to voltage signals as precisely as feasible. Simultaneously, electronic noise must be reduced to detect the lowest X-ray energy.

The silicon drift detector (SDD) sensor is made of high-purity silicon and has a large-area contact on the entry side, which faces the incoming X-rays. A center, tiny anode contact is encircled by a series of concentric drift electrodes on the opposite side.

As part of the testing of the SDD detector chip, the chip is biased before being exposed to radiation. An electron cloud is created for each X-ray detected. Each electron cloud has a To do so requires the insertion of high-speed electrons, which are accelerated into the silicon semiconductor’s conduction band, leaving holes that The electrons are caught at the anode after they have drifted down a field gradient generated between the rings and have been captured there.

The FET preamplifier converts the charge that accumulates at the anode into a voltage signal. The feedback capacitor accumulates commission during operation.

Current leakage from the sensor material and X-ray-generated charge from photons absorbed in the detector are the two sources of this charge. The charge build-up in the preamplifier results in a continuously growing voltage ‘ramp’ due to leakage current, with quick steps overlaid due to the demand produced by each X-ray incident.

To keep the preamplifier from becoming saturated, the accumulated charge must be replenished regularly.

As a result, the capacitor is drained at a predetermined charge level, a process known as restoration or ‘reset.’ 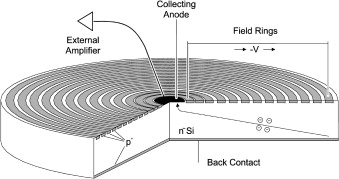 Noise causes variations in the output waveform, limiting the precision with which each step can be measured. If the measurement is inaccurate, the histogram of sizes for photons of the same energy is spread out. As a result, noise impacts the breadth of X-ray peaks, especially at low points.

An SDD detector’s components are as follows:

The collimator creates a limiting aperture through which X-rays must travel to reach the scanning tunneling electron microscope detector. This guarantees that only X-rays from the area stimulated by the electron beam are detected and that stray X-rays from other areas of the microscope chamber are ignored, and microscope preventive maintenance measures are taken.

Background artifacts are caused by electrons that pass through the detector, and the measurement chain is also overloaded. Any passing electrons are forcefully deflected by the electron trap, which is a permanent magnet assembly. Because beryllium windows are thicker and more efficient at absorbing electrons below 20 keV, this configuration is only essential for detectors with thin polymers.

As a vacuum barrier, the window is as transparent as feasible to low-energy X-rays while maintaining vacuum. In both cases, there are advantages and disadvantages to each kind In spite of the fact that Beryllium (Be) is highly strong and durable, it is exceptionally effective at blocking ultra-low-energy X-rays, allowing only sodium (Na) In the event that they’re placed on a supporting grid, these window materials can stand up to the difference in pressure between the detector vacuum and a vented microscope chamber at Polymer-based windows have mainly supplanted Be as the material used for detector windows due to its higher transmission. Windowless detectors can be used in devices that operate under very high vacuum settings, like as TEMs, allowing for even higher sensitivity in light microscope and electron microscope.

The sensor is a semiconductor device that transforms an X-ray of specific energy into an electric charge of proportionate size via the ionization process. Traditional silicon crystals drifted with lithium, known as ‘Si(Li),’ and modern quicker Silicon Drift Detectors (‘SDD’), which have essentially supplanted them, are used for X-ray detection. SDD devices gather the charge released by each X-ray detected at the anode using a field gradient supplied by ring electrodes on the back surface.

The sensor is directly linked to the field-effect transistor (also known as the FET). The charge released in the crystal by an incident X-ray is measured and converted to a voltage output in the first stage of the amplification process.

Cooling of the detector

SDD detectors are cooled by Peltier (thermoelectric) devices attached to the SDD sensor and function at a few tens of degrees below zero. A cold finger or heat pipe transfers heat from these devices to cooling fins in the detector’s body, where it is dissipated.